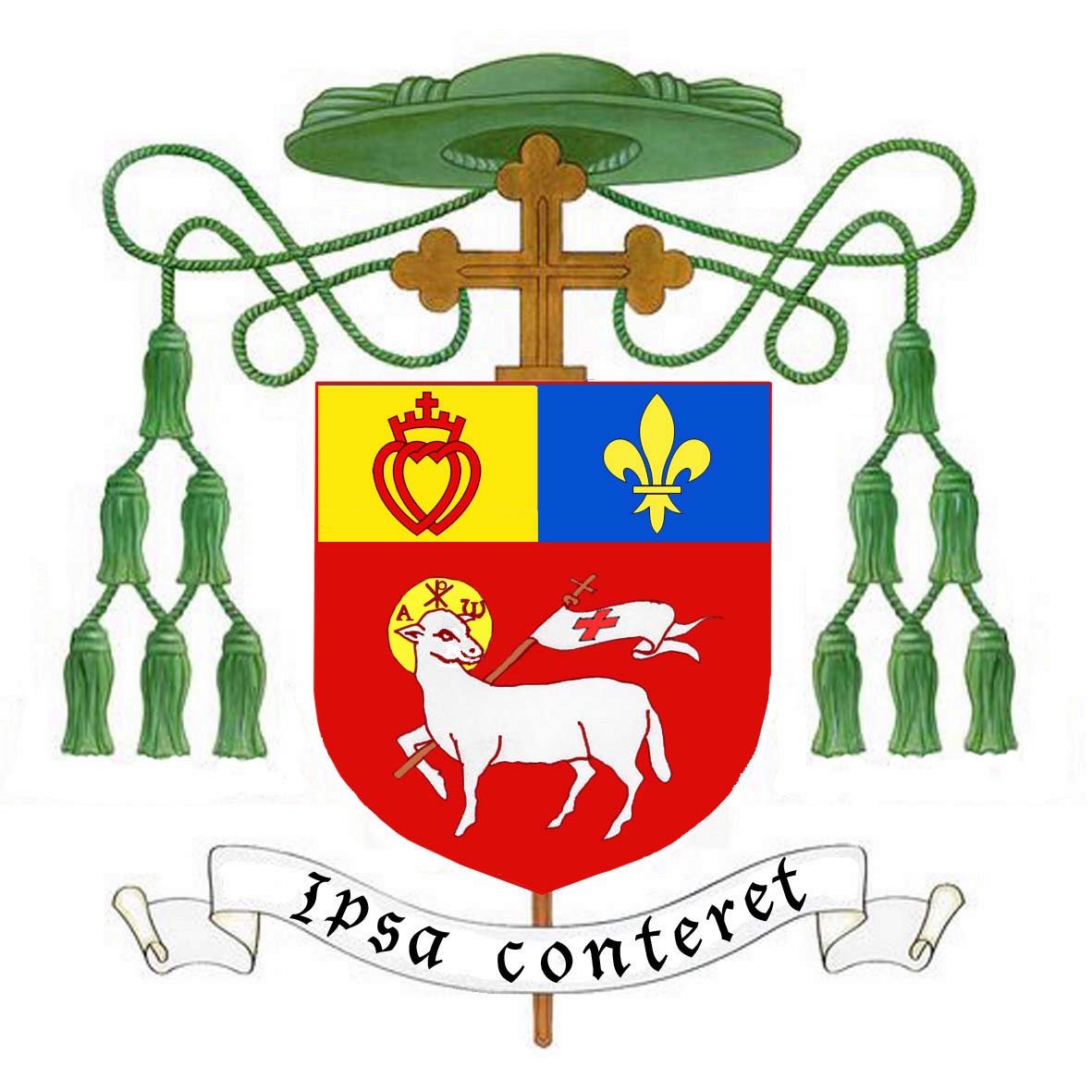 How about a little history to begin, Father, how did you get to know Tradition and Archbishop Lefebvre?

Where were you born? Why were you living in South America?

I was born in Algeria and my family, after the independence, acquired a plot of land in Argentina, close to Paraná. My family was deported from Algeria because the French government seceded power to the militant Moslems that committed horrendous massacres during the course of the process of the independence. My grandparents, parents and uncles worked in agriculture there since 1830.

Returning to the story, how your apostolate in the Society come about?

Archbishop Lefebvre ordained me in 1977 in Econe, and 15 days later I went with him on a trip through the southern United States, Mexico (where the government refused our entry), Colombia, Chile, and Argentina.  The Archbishop put me in charge of starting an apostolate in this region. During the first year 2 Argentinian priests helped me and the following year another Spanish priest (of the Society). After this the South American district of the United States was formed as was my position and responsibility and I began to preach retreats as far north as Mexico.  The first year there were 12 vocations that were put in the Priory of Buenos Aires that was in a large enough house. Following this, around 1980, the seminary in La Reja (Buenos Aires) was built, where Archbishop Lefebvre put me as rector. I stayed there until 1985, when I was named superior of the District of Mexico. That was when they built the churches in Mexico City and Guadalajara.  I looked after the country and its distinct places together with Frs. Calderon, Angles, and Tam. Later I was in France for some years.  After all of this I was named as professor of history in the Seminary in Argentina and I was there until the expulsion of Bishop Williamson from Argentina (2009).

Did Archbishop Lefebvre confide in you?

Archbishop Lefebvre gave me free access to his mail and correspondence and he put me in charge of certain records.  He had a certain kind of trust for me: in 1977 in Albano he asked me what I thought about consecrations.  In this opportunity he confided in me that “they are waiting for me” (the rector in Econe and the professors).  They would suggest accepting the New Mass and the Council in order to preserve the Tridentine Mass.  They said to him: “now we are confronted with Rome.  If we conserve the Mass (Traditional) we must accept the Council.”  They tried to persuade the Archbishop to retire in a beautiful house in Germany, but he told them that they were free to leave if they wanted to.  He got rid of them.

Is it true that Archbishop Lefebvre asked you to accept being consecrated a bishop?

In 1986, while on a visit to Econe, he called me aside after a meal and asked me if I would accept being consecrated a bishop. Now, knowing what happened, I suppose I should have accepted.

Then you did not accept?

I told him that it seemed to me that Bishop De Galarreta would be the most adequate.

Can you summarize what happened in 2012?

In that year we were very close to an accord and it failed at the last moment, probably, because of the issue with Bishop Williamson. The deal failed because of that matter and the letter of the three Bishops. Both of these caused the deal to fail.

It is said that the key to the ad intra strategy of Bishop Fellay is the backside of the General Chapter.  Can you tell us something about this?

The General Chapter was very well prepared by Bishop Fellay and the they (the accordistas) accomplished their objectives.  That was when I had understood what Archbishop Lefebvre and his friends felt like in the Second Vatican Council.  Bishop Fellay had taken the decision of a policy of getting close to Rome and he had fixed it in order to have the the general support of the Chapter in expelling Bishop Williamson, who was the only one capable of obstructing this policy.

According to your judgement, what should be the conditions required to make a deal with Rome?

Archbishop Lefebvre told us that while there were no real changes in Rome, a deal would be impossible, because these people were not loyal, and one cannot intend to change one’s superiors.  It is the cat that chases the mouse and not the mouse that chases the cat.  A deal would be equal to handing over oneself to the modernists, and consequently, it must be absolutely refused.  It is impossible.  We must wait for God’s intervention.

Can you tell us what you think the visits of evaluation of various modernist prelates to the Seminaries of the Society?  Is it true that once Archbishop Lefebvre received some prelates?  What is the difference now?

It dealt with exceptional visits during which Cardinal Gagnon never had the possibility of defending the Council, while on the other hand now it deals with the first steps of a reintegration (of the Society) into the conciliar Church.

What do you think about an eventual unilateral recognition on the part of Rome to the Society?

It is a trick.

Between the 2006 chapter and the crisis started in 2012, certain changes are observed and attitudes of the authorities of the Society of St. Pius X in respect to Rome.  What is the reason for this change?

It is the decision of this appears to be reintegrated into the conciliar church.  Since 1994 or 1995 there were some contacts with GREC that were significant steps towards a reconciliation, like what had been seen with the Ambassador Perol (represents tatie of France in Italy) who is the inventor of the lifting of the excommunications (2009) and the Motu Proprio (2007).  That must have had another relative act of recognizing the Council.

What would Archbishop Lefebvre do in the current situation?

He would follow in the line that he indicated to us after the consecrations, doing away completely with the possibility of a deal.

If in the future you were invited to go to Rome and speak with the pope would you go?  What would you say?

First, I would consult with all of my friends in the resistance.  I would go with Bishop Williamson and the other excellent priests that accept the combat of the resistance with much valor.  And I would keep all of our friends well-informed with all transparency.

Bishop Fellay has said that the Society is in agreement with 95% of the Second Vatican Council. What do you think of this?

Archbishop Lefebvre answered that all of the Council is invaded by a subjectivist spirit that is not Catholic.

Is Francis, being an effective devastator of the Church and objective destroyer of the Faith, a true pope?

What is the state of the process of your expulsion from the Society?

The last news that I had heard was by chance a second warning in an email.  After tomorrow, therefore, the Society of St. Pius X will again have 4 bishops!  They better throw me out quickly.  Deo gratias!

This decision of consecrating a bishop must’ve been thought about and meditated during much time.  Just like Archbishop Lefebvre, you, Bishop Williamson and the priests of the resistance have not wanted to collaborate in the destruction of the Church.  It is for conserving the faith intact that they have persecuted you all, condemning you all and calumniating you all many times.  Your episcopal consecration could run the risk of resulting in an alleged excommunication.  What were the principal reasons for bringing about this consecration?

The main reason is that that we cannot leave the resistance without bishops.  Just like Archbishop Lefebvre said, Catholic bishops are indispensable for the conservation of the true doctrine and faith and the sacraments.

Archbishop Lefebvre thought of you in the consecration of bishop and now Bishop Williamson is finalizing this wish.  What will be your main concern?

Maintaining the strength of the work of Archbishop Lefebvre and the way that he had gone, without deviating too much to the right or to the left.

Where will your place of residence be?

In France, where we have been thinking about opening a seminary close to the Dominicans of Avrille.

Would you like to say any words to the priests and faithful that are still under the structure of the Society but that are not satisfied with the liberal ways in the last years?

That they return to read into and meditate upon the texts of  Archbishop Lefebvre.

Can you explain to us the essence of your coat of arms?

In the center is the Lamb of the Apocalypse, and Alpha and the Omega the Lamb of God that takes away the sins of the world announced by Isaiah.  The hearts are symbols of the Vendeé martyrs and the revolution; and the flor de lis is the emblem of Catholic France.  The motto, ipsa cónteret (she will crush you) is taken from the Vulgate, Genesis 3, 15 where God promises the victory of the Virgin Mary against the dragon.

Is there anything more you would like to add?

We conserve Faith, Hope, and Charity.  There is nothing to doubt and we must beg of God and Our Lady that we are maintained in these virtues.

Father, we greatly thank God, His Most Holy Mother, and Saint Joseph protector of the Church for this great grace.  We ask of God that he may protect and conserve you.  We thank you for having accepted this tremendous position and Bishop Williamson for consecrating you as one of the successors of the Apostles.  Deo Gratias!

(Translation from French by Michael.)