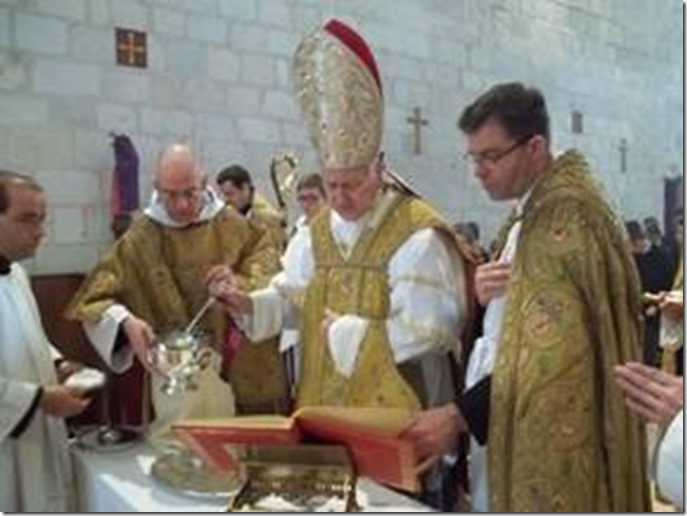 “And I looked for one that would grieve with me, but there was none: and for one that would console me, and I found none”. In the present time of the Church’s Passion, Our Lord renews this complaint from Psalm 68 (verse 21).  However, how can Our Lord, Who is gloriously reigning in Heaven, be sad and ask for consolers?

Saint Thomas Aquinas provides the answer when he explains the following expression of Saint Paul: “Sadden not the Holy Ghost” (Eph. 4: 30):

“How can this be said, since the Holy Ghost, being God Himself, cannot possess any passion (that is, emotion) or suffer sadness?  Answer: The Holy Ghost is “saddened” when the person in whom He dwells is afflicted, according to the words of Our Lord: “He who despises you, despises Me” (Luke 10:16).  Also, one can say that it is a metaphorical expression, as when one speaks of God’s “anger” in order to designate His avenging justice, which [for God] is not a passion (as it is in us), but a virtue.  Thus, it is said that God is saddened, when He withdraws from the sinner, as a saddened man takes leave of the person who has afflicted him.  As a result, the expression “sadden not the Holy Ghost” signifies: do not drive Him out of your soul by sin.”

Accordingly, we can say that Our Lord Jesus Christ is saddened insofar as the members of His Mystical Body are afflicted, as is presently the case of so many Catholics being persecuted under Islamic, Communist, and Hindu regimes.

Secondly, Our Divine Lord is saddened in the sense that the sins of men cause Him to turn away.  In the prayer of the Act of Contrition, do we not say that sin offends God, or displeases Him?  It is a way of saying that God acts toward the sinner in the same manner as someone who, upon receiving an offense, suffers grief and separates from the person who has given the offense.

“If this is true of God considered in His Divine and purely spiritual nature, it is even truer when speaking of Christ’s holy soul […]:  His soul in fact is capable of feeling, and therefore Jesus is truly sensitive to the love which is due to Him, but which many refuse to give.”  [Father Reginald Garrigou-Lagrange, OP, in the preface to Élévations sur la prière au Cœur Eucharistique de Jésus – Elevations on the Prayer to the Eucharistic Heart of Jesus.]

Thus, because Our Lord Jesus Christ is “the Word made flesh” (something which cannot be said of the Father or the Holy Ghost), there is a third reason for His sadness:  while He was on earth, particularly during His agony in the Garden of Olives, Our Lord experienced a veritable sorrow:  “My soul is sorrowful even unto death (Mt 26:38)”.  Now, Our Lord was grieved by the sins of all men, including those being committed today.  Our Lord had a perfect knowledge of all these sins thanks to the “beatific vision” which He possessed from the moment of His conception.

When Our Lord asks us to console Him, He is asking us to comfort Him with respect to this triple sadness:  that of His Mystical Body, by consoling persecuted Christians;  the metaphorical sorrow of His Divinity offended by our sins, by doing penance;  and that of His Sacred Humanity, by sharing in the pains of His agony, especially through the practice of Holy Hours, but also through the meditation of the Rosary, attending Mass, and receiving Holy Communion in reparation:  “Take and drink the Body and Blood of Jesus Christ, horribly outraged by ungrateful men.  Make reparation for their crimes, and console your God”  (the angel to the three children of Fatima in 1916).

“We do not console someone effectively unless we participate in his sufferings;  thereby taking a portion of them upon ourselves.  It is certainly an admirable and touching condescendence of Almighty God – the God of all consolation, entirely sufficient to Himself – to want to be in need of us, the same as He chose to be in need of the consoling angel at Gethsemane.  This implies that we must have our share in the sufferings of the Sacred Heart of Jesus, participating, in a certain measure, in the sorrowful life that He led on earth, before we partake of His glorious life in heaven.” [Garrigou-Lagrange, work cited above, page 14.]

This was well understood by little Francisco of Fatima.  Sister Lucy wrote of him as “having no other thought than to console Our Lord and Our Lady, after seeing how sad they were in the visions.”   Sister Lucy writes further:

“One day, I asked him, ‘Francisco, what would you rather do: console Our Lord, or convert sinners so that there will be no more souls going to hell?’  He answered, ‘I prefer to console Our Lord.  Didn’t you see how Our Lady looked so sad last month when she told us that no one should offend Our Lord anymore, because He has already been offended too much?  I would like to console Our Lord and then afterwards convert sinners so that they will no longer offend Him’” (see the Sel de la Terre, #53, pp.232-233).

Today, more than ever, Our Lord is saddened:  by the persecution of Catholics everywhere in the world ─ including the more hidden, subtle persecution taking place in our formerly Christian nations, carried out by secularist propaganda, whose program is to instill atheism in the souls of men;  and by the worldwide revolt “against God and against His Anointed One” (Psalm 2:2) ─ including in His Church, where the modernists “prefer the fables of men” (2 Tim. 4:4) rather than Tradition.

Let us console Our Lord by our efforts to live a truly Catholic life, for example, by not wasting our time with audio-visual entertainments, or with other useless amusements, by fleeing excessive modern-day comforts that only make us soft and lazy, by reading a good catechism or other edifying books, etc.

December 31st: The community goes on pilgrimage to one of Anjou’s most hallowed sanctuaries: “Our Lady of Béhuard” situated on an island in the middle of the Loire River.  After Compline, a (growing) number of faithful join us in singing a Te Deum of thanksgiving (with a plenary indulgence).

January 16th:  Mr. François-Xavier Peron gives a conference for the faithful on Pope Francis’ revolutionary “Synod on the Family”.

January 16th – 17th:  Fathers Angelico and Marie-Laurent are in Alsace for a tertiary meeting, followed the next day by Sunday Mass and conferences for the faithful of the Combat for the Faith.  Regular tertiary meetings throughout the year give us the chance to provide Sunday Mass for a growing number of faithful in many different regions:  Paris, Brittany, Alsace, Lyons, Clermont-Ferrand… (Not all these meetings can be mentioned in this short chronicle.)

February 3rd – 4th:  Father Prior and Father Marie-Dominique preach the preparatory retreat to the seminarians of Saint Louis-Marie Grignion de Montfort Seminary before their cassock-taking.

February 21st:  Fathers Marie-Dominique and Reginald lead the boys of the Marian Congregation of our school on a pilgrimage to Pontchâteau, in Brittany, to pray at the famous Calvary of St. Louis-Marie Grignon de Montfort.

February 27th:  Fathers Angelico and Hyacinth-Marie are with the “Our Lady of Fatima Youth Club” for one of the regular outings in the countryside of Anjou.

March 7th:  Feast of St. Thomas Aquinas, light of the Church and glory of the Dominican Order!   The festivities include a Solemn High Mass and a conference on the method of St. Thomas.  We also have the joy of receiving the visits of Fr. McDonald, Fr. Bruno (U.S.M.L.), and Sr. Marie-Liesse (former SSSPX).

March 24th:  Holy Thursday.  For the first time at the Friary, we are graced with a Chrismal Mass, officiated by H.E. Bishop Faure.  At this Mass, the Bishop consecrates the Holy Oils necessary for the sacraments of Confirmation, Extreme Unction and Holy Orders (and solemn Baptisms) during the coming year.  What an eloquent demonstration of the importance and necessity of the recent episcopal consecrations!  Without Bishops, it is impossible for priests to continue their apostolate, and have their candidates ordained to the priesthood.

March 26th – 27th:  Easter Vigil.  The wind and rain seem to be stirred up by the devil (no doubt angered by the two adults to be purified in the waters of Baptism that night) in order to prevent the blessing of the new fire and the procession with the Easter candle.  Their efforts are to no avail, and the Vigil Mass is celebrated in presence of an unusually large and fervent crowd of faithful.

April 4th – 11th: Fr. Louis-Marie is in Rome for a pilgrimage with the senior class of Saint Thomas Aquinas Boys’ School.  It was an occasion for them to see up close the glories of Eternal Rome, as well as the miseries of Conciliar Rome…

April 12th:  Classes start back up for the schools, the clerical brothers and the seminarians.

April 17th:  Fr. Marie-Laurent, accompanied by two seminarians, mans a booth at the annual assembly of the “French Renewal” patriotic movement, in Paris.  More and more people are worried about the world political situation; our presence at such gatherings allows us to help souls analyze current events under the light of the Faith.

May 5th:  Feast of the Ascension and annual gathering of the alumni of St. Thomas Aquinas Boys’ school.  What a consolation to witness the perseverance of former students, and hear them say “thank you” for the doctrine and apologetics courses they received!

May 13th-15th:  Fr. Angelico and Br. Louis-Bertrand are at Le Puy-en-Velay (France’s oldest Marian Shrine) for the Pentecost pilgrimage of the Combat for the Faith.  In his sermon during the Pontifical High Mass on Sunday, His Excellency Ferreira da Costa (Dom Thomas of Aquinas O.S.B.), recounted how the official recognition of the conciliar church led inevitably to the abandonment of the combat for the Faith in the Barroux monastery (France) and Campos (Brazil).  His conclusion: it is now up to us to continue the fight!

News from our work sites

The installation of the new library is progressing.  One by one, the donated movable bookshelves are being adapted by a local ironsmith to fit the rails on the floor.

A large part of the stone wall protecting the property having collapsed, “Eddy”, our maintenance man (a professionally trained mason), is doing a beautiful job in restoring it with the help of a few of the high school boys, happy to learn the trade.

A few overdue projects to accomplish:

-The paving of the parking lot and two entrance roads, which have been seriously deteriorated over the years by the steady increase of traffic (daily drop-offs and pick-ups for the school children, three Sunday Masses, as well as other various parish activities).

– New buildings for the Friary workshop.  For the moment, the lay brothers work in temporary barracks built by the US army in 1945, and we’re not sure how long they will remain standing. (A wood shop for the boys’ school is also planned).

-The refurbishing of the Chapter room; in particular, the installation of a worthy altar for the daily Masses which are celebrated there.

For timely articles and spiritual reading please go to our website: 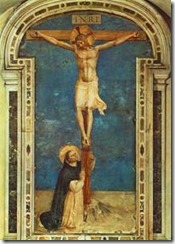