The Importance of Principles (Part II)

Maintaining Principles in the Modern World

Escaping the seduction of false principles is especially difficult nowadays because these false principles are being taught to the youth beginning at elementary school (thanks to the pseudo-educational system), continually hammered out by the media, and largely accepted by the Conciliar Church:

“The battle is mainly a battle of doctrines. Your resistance, dear brothers, consists therefore in being firm in your minds against the seduction of false and misleading principles. […]  When I ask the wise [men] of this era to identify the worst hardship of modern society, they reply unanimously that mankind is becoming weak and soft.  This reply has even become cliché.  However, we must go further, and ask the ultimate question. […]  Where does this weakness come from?  Isn’t it the natural and inevitable consequence of doctrinal weakness, weakness in belief, and, to be more exact, weakness in the Faith?  After all, courage has no reason to exist if it isn’t at the service of a conviction.  The will is a blind faculty when it is not enlightened by the intellect.  One cannot walk with assurance in the darkness of night, nor even in merely dim daylight. […]  Dear brethren, today, more than ever, the primary strength of the wicked is the weakness of the good.  The core of Satan’s reign among us is the toning down of Christianity in Christians”  (Cardinal Pie. Panégyrique de Saint Émilien, November 8, 1859.  Note that Saint Pius X cited the last sentence of the above passage, in his sermon on December 13, 1908, when he beatified Saint Joan of Arc).

The Importance of Education, Especially in the Family

It is especially in the home that moral principles are acquired.  These principles are indelible when they are learned right from childhood – which is the reason why the Revolution constantly wages war against the family, in order to remove any obstacle to the spreading of its errors:

“Nowadays [in 1910!] we have become helpless witnesses to such acts which – if we were living in the ancient times of paganism – even the barbarians and savages would have violently opposed.  Everywhere in France, schools in which the young are taught to know, love, and adore God, are being closed by a government declaring openly that its goal is to establish a nation of atheists.  We are helpless to remedy the situation because we no longer have firm principles solidly established in our souls.  Instead, we have but vague and unstable ideas, incapable of giving us the strength and energy we need.  Why are our ideas unstable?  It is because the higher, fundamental principles have not at all been inculcated in the souls of children by parents, who, having been formed by these principles, have not transmitted them.  In a word, our families no longer have the sense of tradition.”   (Msgr. Henri Delassus. L’Esprit familial dans la maison, dans la Cité et dans l’État. Lille, France. Éditions Deslcée de Brouwer, 1910. pp. 147-148).

The Force of Principles

There is a force attached to the confession of the truth.  If we know good principles well, and if we count on the grace of Our Lord to make these principles known, there will always be men of good will to listen and understand:

“Today more than ever – and let it be understood rightly – society needs strong and consistent doctrines.  Even though ideas are falling apart everywhere, asserting the truth can still be done in society, provided that this assertion of truth be firm, substantial, and without compromise.  The exchanges between men are becoming more and more sterile; each one seems to hold on to a part of truth, without grasping the whole.  As in the early days of Christianity, it is necessary now that Christians attract the attention of all, by the unity of their principles and judgments.  They have nothing to borrow from this chaos of negations and endless experimentation that testify so eloquently to the powerlessness of modern society.  This society is only living off the rare remnants of the former Catholic civilization that the Revolution has not yet taken away and which God’s Mercy has preserved from destruction.  It is up to you, convinced Catholics, to show yourself as you are.  The world may fear you at first, but be convinced that it will come back to you.  However, if you try to flatter these men by using their language, you will amuse them only for a time.  In the next moment they will forget you because you have not made a serious impression on their minds.  They will see in you the image of themselves; and since they have no trust in themselves, they won’t have much more confidence in you.  There is a grace attached to the full and entire confession of the Faith.  This grace, according to Saint Paul, is the salvation of those who accomplish this confession; and experience shows that such a confession is also the salvation of those who witness it.  Be Catholic and nothing other than Catholic.”   (Dom Prosper Guéranger, O. S. B. Le Sens Chrétien de l’Histoire. The Christian Sense of History. Cited in Le Sel de la Terre: issue 22 – Fall 1997, p.196).

September 7th:  Start of the school year for Saint Philomena Elementary School, and Saint Thomas Aquinas High School.  Among the extracurricular activities for the high school boys:  weekly study groups to give them a formation for the doctrinal, political and economic combats of tomorrow.  The number of volunteers having grown from last year, there are now three different groups, under the direction of Fathers Innocent-Marie, Reginald and Terence.

September 14th:  Start of the school year for our three clerical brothers.  On the same day, according to the Constitutions of our Order, the Regent of Studies (Fr. Emmanuel-Marie) and the Master of Novices (Fr. Marie-Dominique), renew their Tridentine Profession of Faith, the anti-modernist oath, and the oath to always hold firmly to the doctrine of Saint Thomas Aquinas.

September 26th:  “Our Lady of Fatima Youth Club” has its first meeting of the year, with Fathers Angelico and Hyacinthe-Marie.

October 3rd: Father Prior and Father Angelico represent the community at the official blessing by Bishop Faure of Saint Louis-Marie Grignon de Montfort Seminary in nearby Avrillé. 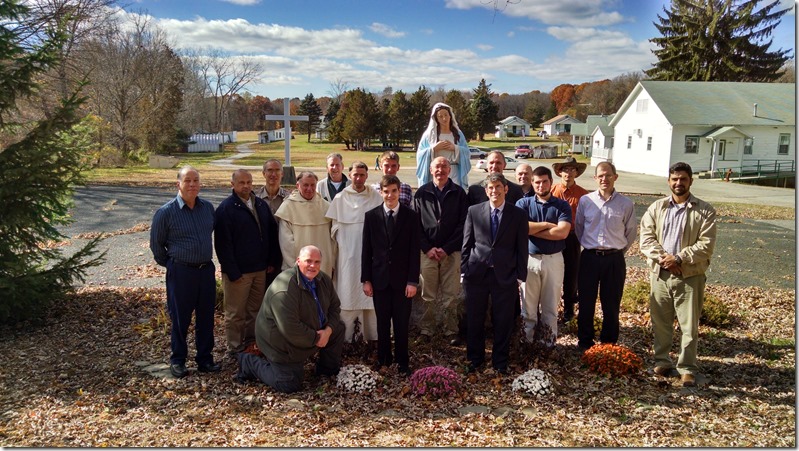 October 24th to 11th November:  Fathers Marie-Dominique and Angelico fly to the U.S. to preach two retreats with Father Zendejas on the 15 Mysteries of the Rosary.  In all, about 35 men and woman from all over the U.S. followed the retreats, and will now hopefully know how to get more out of their daily Rosary.  These retreats were also the occasion for five postulants to be received as novices in the Third Order.  For the Feast of Christ the King, the Fathers replaced Fr. Zendejas at his chapels in Connecticut and Pennsylvania.  Before returning to France, the Fathers made a small detour to Minnesota for Sunday Masses, and a few conferences.  A large number of faithful came out, despite the distance.  In each of the places visited, the zeal and fervor of the faithful was remarkable.

November 21st: Meeting for the preparation of next summer’s “John Vaquié Days” (yearly doctrinal session on the tactics of the enemies of the Church).  Three graduates from Saint Thomas Aquinas Boys’ school begin to take an active role in organizing this event, which gives us hope for the future!

December 1st:  As on every first and third Tuesday of the month, Fr. Angelico meets with a group of faithful in the Friary Library for the adult catechism class.  This year’s theme: Old Testament History.

December 8th:   Second annual Mass and candle-light Procession in the city of Angers, in honor of the Immaculate Conception of Our Lady. 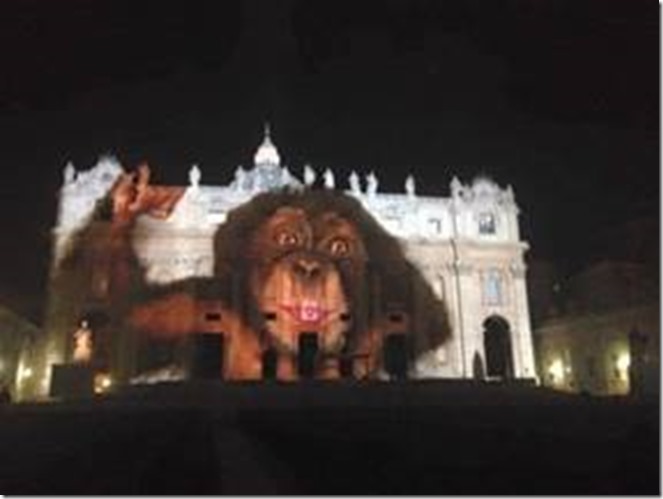 On the same day, Pope Francis inaugurated the “Year of Mercy” with a light show at the Vatican.  The show, jointly sponsored by the World Bank, had a “New Age” environmental theme, in conjunction with the Pope’s recent Encyclical on ecology.  We cannot participate in this “Jubilee”, whose sole purpose is to celebrate the 50th anniversary of Vatican II and the new humanistic religion it has ushered in.  For a more detailed refutation of those who advocate participating in the “Year of Mercy”, please go to <https://dominicansavrille.us/should-we-participate-in-the-jubilee-of-mercy/>

December 22nd:  Feast of the Patronage of the Blessed Virgin Mary over the Order of Preachers.  Bishop Faure confers the ecclesiastical tonsure to our three clerical Brothers. 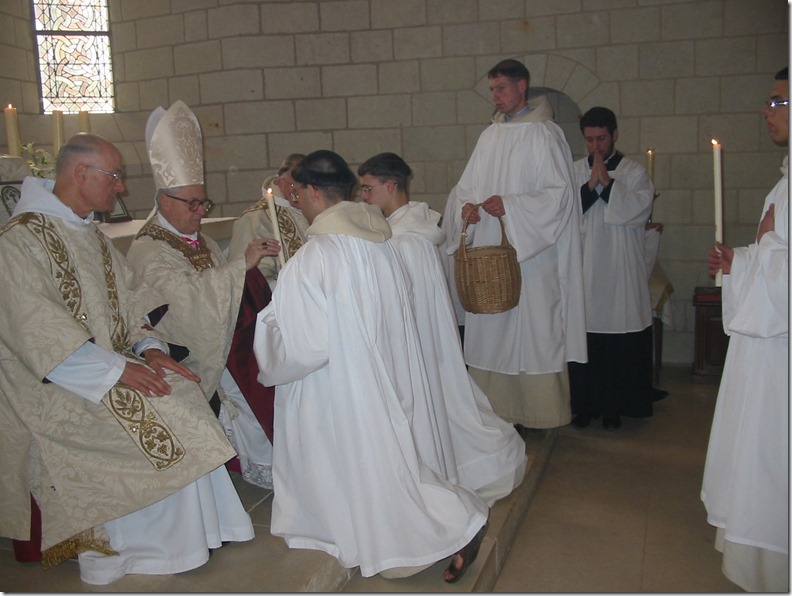 Brothers Alain, Louis-Bertrand and Agostinho offer their candles to the Bishop as part of the ceremony.

December 25th: After the solemn ceremonies of the Dominican Christmas Liturgy*, the afternoon is reserved for the traditional Christmas recreation.  As each year, Christmas carols were sung in French, English, Portuguese, Polish and Flemish (the five most common mother tongues among the members of our very international community), but this year there was something new:  it’s the first year we were privileged with the presence of a Bishop (H.E. Faure)!

*The Dominican liturgy has conserved a few practices that have been abandoned in the Roman rite, for example, the beautiful sequence Laetabundus that is sung just before the Gospel. 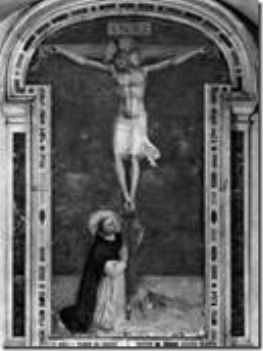 For more information write to: